I used to be obsessed about muscular power-lifters and heavy-weight professional fighters. Their colossal frames and display of raw physical power was a great motivation to push myself in the gym and develop strength. One might think that my interest in big, strong man would make me turn my eyes to sumo in the past, but it had not… well, until now.

Sumo is this element of Japanese culture foreigners hear about, but never see. Japanese national sport nobody does. A tradition which genesis most Japanese do not really know. It is also heck of a lot of fun to experience on your own eyes. Back in my home country I lived under a strong impression that sumo wrestling is not more than a shoving competition performed by, how Western pop-culture often depicts them, overfed fighters. I was very arrogant, I know. 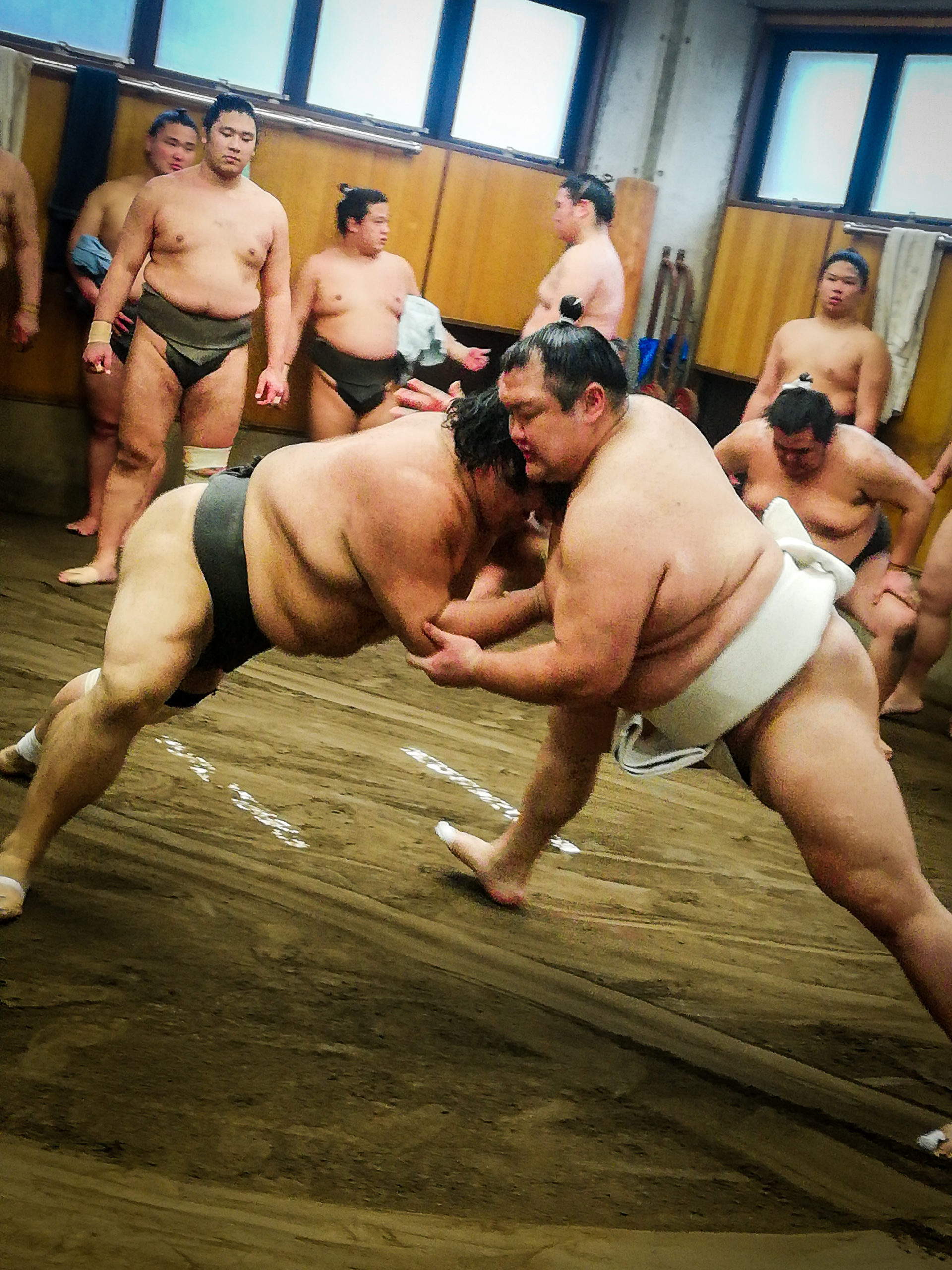 My opinion about the sport changed completely after seeing sumo wrestlers (or how Japanese call them ‘rikishi‘) train. I was glancing at a rikishi standing next to me. His silhouette: a Quadzilla, one leg the width of my torso, very well sculpted deltoids, bulging triceps and enormous calves. He was also the first person to fight and proved my previous assumption about sumo wrong in its entirety. Sumo fights are fast, unpredictable and often of times brutal. They are stripped of cynicism and drama often seen in Western fighting and wrestling, therefore left only with that barbarous and extreme energy martial arts tend to have. Rikishi’s posture and gaze is intimidating, almost scary.

Matches are held on a dohyo, a square platform made of straw bales and clay. To win the bout one needs to push their opponent off of it, or make him touch the ground with anything else than his feet. Since matches end pretty quickly there is plenty of room for error, so a judge called gyoji announces the winner. Till this day gyojis carry a katana with them, since traditionally they are supposed to disembowel themselves in case they make a mistake.

Before entering the ring rikishi are performing ceremonial rites and purifying the ring with salt. They lift the palms of their hand to the sky to show that they do not carry any weapons inside. Just before the fight begins fighters crouch on the opposite sides and stare at each other trying to read opponents strategy. 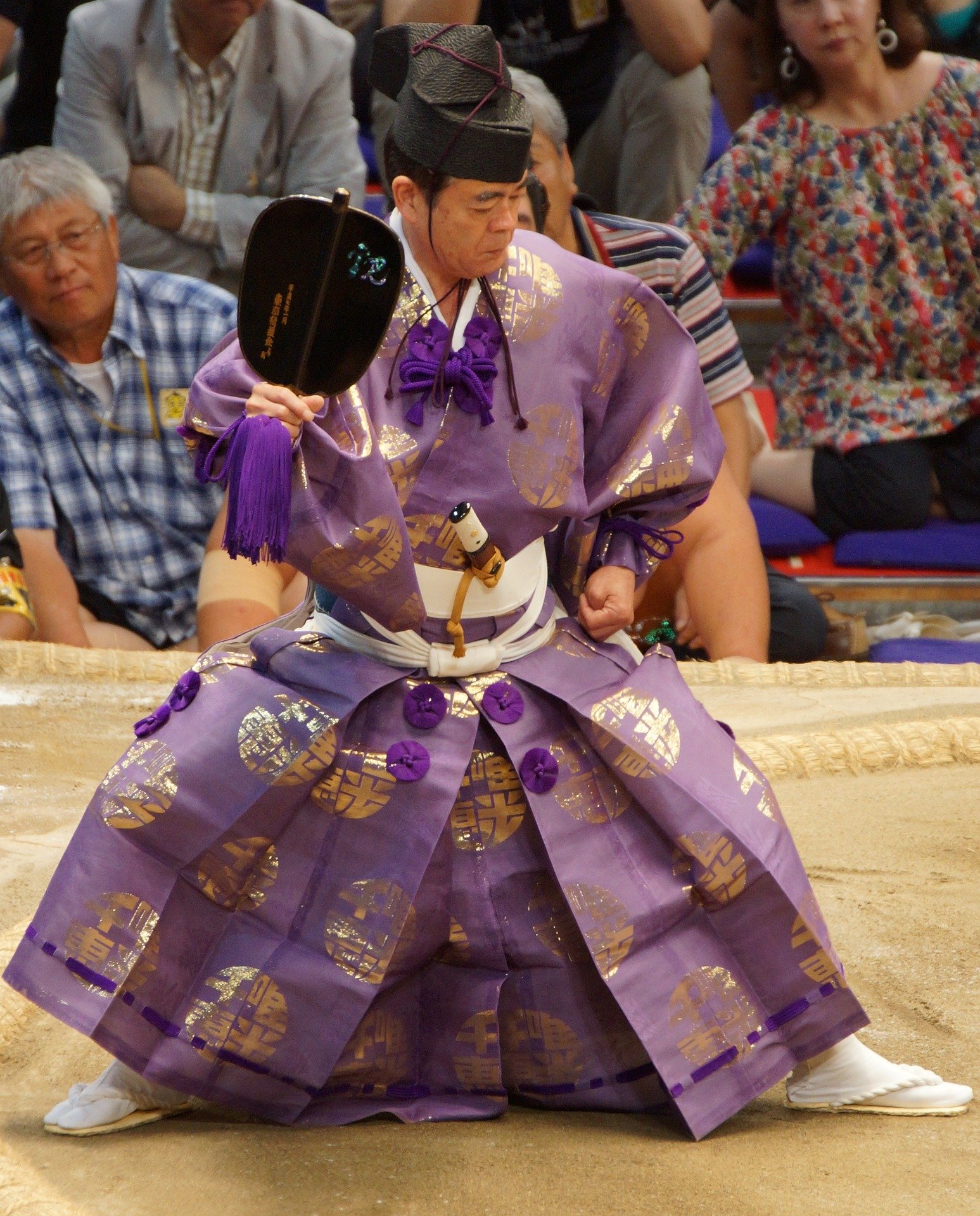 Matches are held on odd numbered months, six times in a year, one venue, called a hon-basho, lasting for 15 days. Fights start since morning, but usually not earlier than 8:00 AM. At this time the least skilled wrestlers are competing. Matches of most experienced rikishi are held later in the afternoon. This is the time you can see the sumo’s best class – yokozuna.

There are no weight classes in sumo, however there are six ranks. Fighters compete against those in the similar rank and after enough time and number of victories they advance to better ranks. In the highest rank there are currently 2 yokozuna, a special and uncommon status for those who cannot get any better. Both of them are Mongolian and they receive a lot of criticism from xenophobic fans for their foreign origins. There were also many watchers disappointed with an ex-yokozuna Asashoryu, also a Mongolian, whose scandalous behaviour including bar brawls and yelling at judges made a bad name for foreigners in the sumo world. Asashoryu retired in 2010, before the decision about revoking his yokozuna status would pass, making him a first yokozuna in history to be demoted. Only 71 wrestlers have achieved yokozuna status since the 18th century and the last Japanese yokozuna was Wakanohana, who retired after getting injured in 2000. 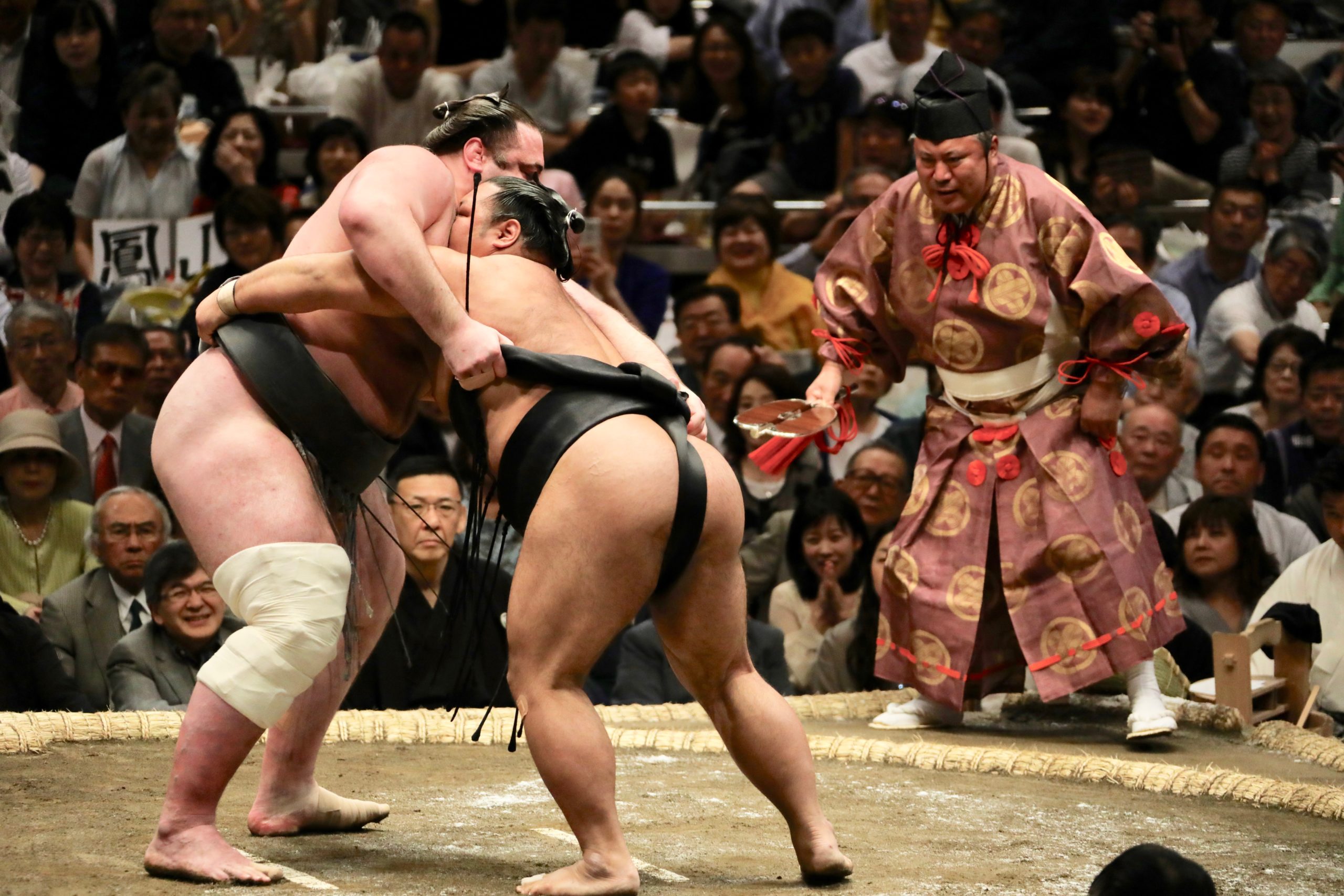 Apart from actual wrestling venues you can see sumo wrestlers fight at, you can also see them train at one of many sumo stables. Sumo stables are coordinated by a stable-master, a retired sumo wrestler. First the trainees spar together and after an hour or so more skilled sumos join. Training is rigorous and energy-draining especially for the youngest ones. They are pushed to their limits and often have to train with higher class wrestlers, so they always lose and learn from their mistakes.

Sumo life is a tough life, it requires one to commit entirely to the lifestyle. Well, saying it this way does not make it seem different from any other professional sport, but there are differences. When you become a sumo you become a part of a stable fraternity. You are obliged to follow strict hierarchical rules, serve your stable-master and adult wrestlers. Outside of the stable you must set example for the society, not causing trouble or interrupting others. Famous sumo wrestlers often appear on television and in interviews. In a strange way they are also idols for the Japanese. Disciplined, obedient, but also powerful and charismatic. 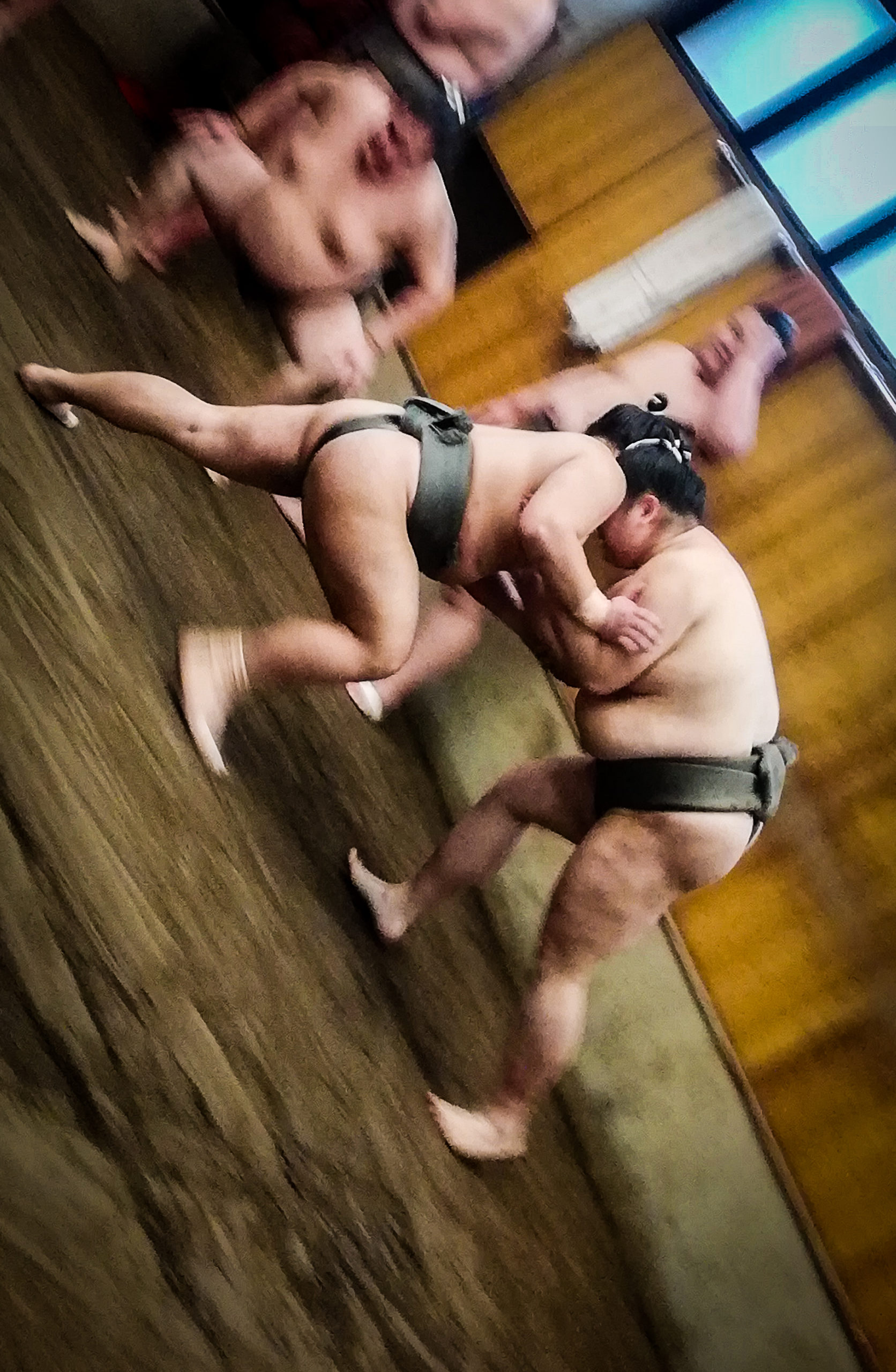 Last 50 years was a peculiar period for sumo industry, including allowing foreigners to join the sport, losing viewers due to the raise in popularity of baseball and football, scandalous actions of some undisciplined wrestlers and illegal matches carried out for Japanese mafia, yakuza. Sport has not changed much over the years, organizers insist and intent to keep it in its traditional way, but some means to adapt to the present days must have been done.

Future for the sport is uncertain, since Japanese youth does not want to participate and commit to being a sumo. There was a huge scandal of a stable-master convicted of assassinating one of his trainees after he tried to escape the stable. Other higher ranked wrestlers bit him to death using glass bottles, there were also burns from petted cigarettes on the boys body. This news scared a lot of middle-school students aspiring to become a sumo in the future. This was of course an extreme case though. What stops people from joining a stable is most likely a different plan for life or parents decision to continue their boy’s education. 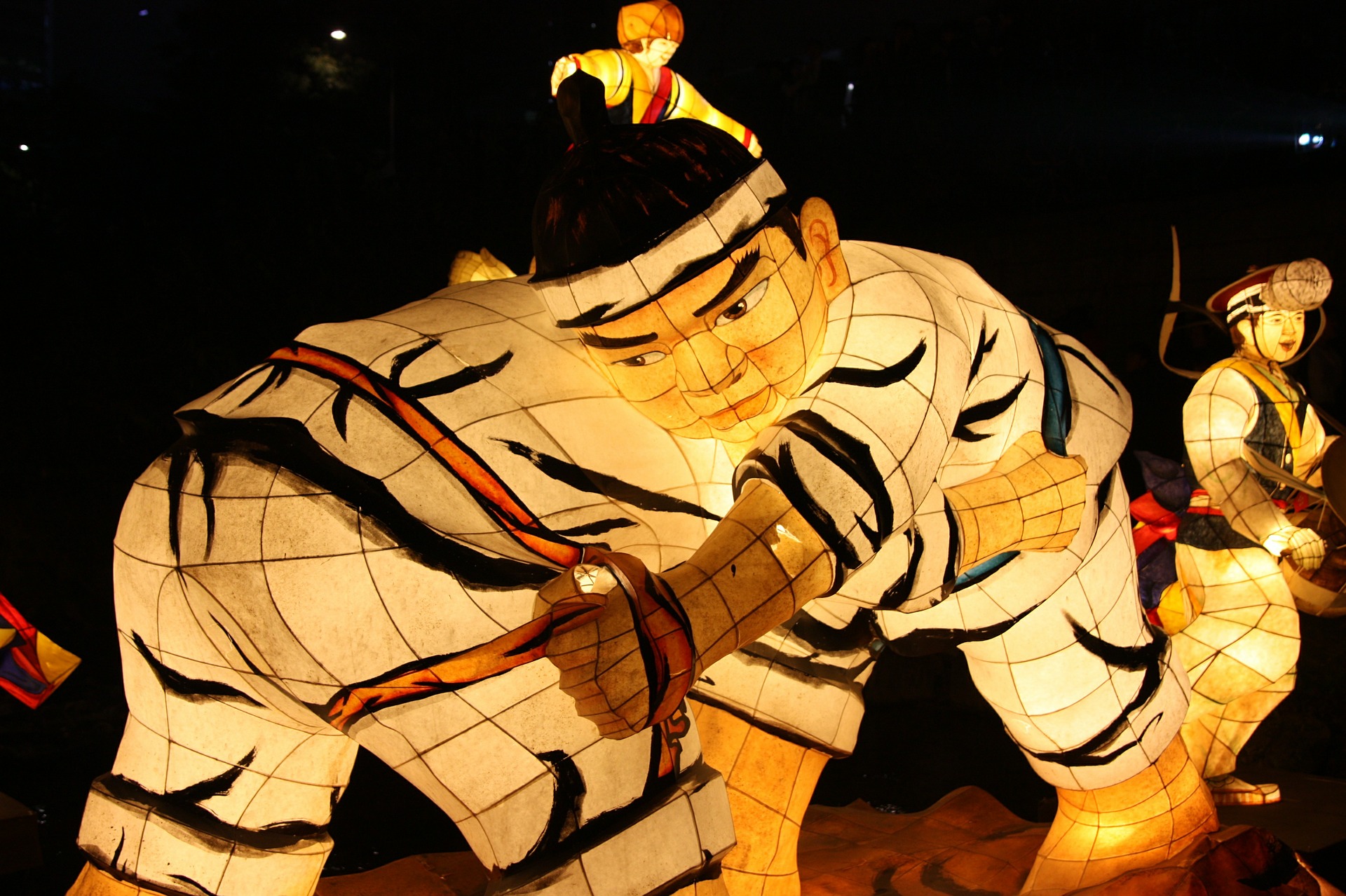 Ideally, the sport will not end any time soon, we will still have plenty of chances to admire the strength of amazing sumo, industry will adapt so xenophobic comments and illegal matches stop being a thing and the abuse of younger trainees is not allowed. It is an interesting sport connected strictly to its routes making it a big part of Japanese cultural heritage.

I strongly advise on visiting a sumo stable or going to see a venue when you come to Japan, because it grips you in a way you never have been gripped. Does that make sense? Anyway, see you next post.